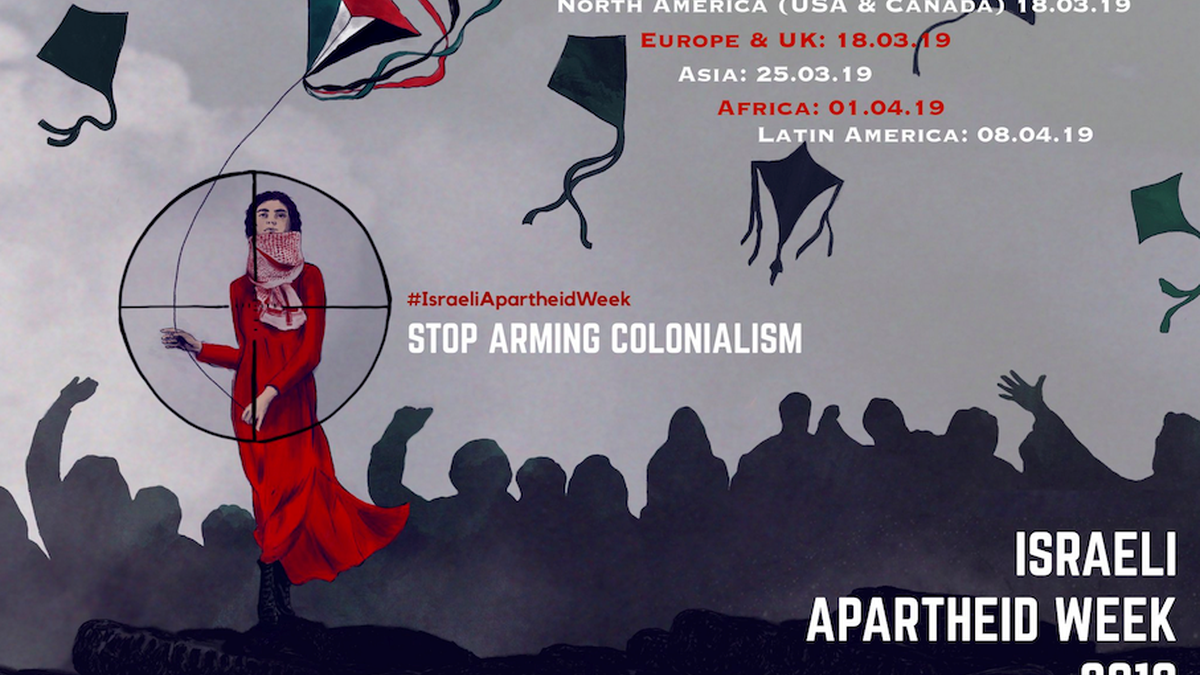 RAMALLAH, Tuesday, March 19, 2019 (WAFA) -  The 15th annual Israeli Apartheid Week (IAW), the largest global boycott, divestment and sanctions (BDS) mobilization for Palestinian rights, opened today with more than 80 events in 40 cities across Europe, North America and Palestine, featuring protests, lectures, film screenings, and cultural events, according to press release. IAW is expected to be held in more than 200 cities worldwide.
IAW officially kicked off Saturday in the occupied Palestinian city of Al-Bireh, where the Palestinian BDS National Committee (BNC) convened the Sixth National BDS Conference - a grassroots, civil society gathering with over 900 participants.
The large BDS Conference in Palestine and worldwide IAW mobilization in support of Palestinian human rights are taking place against the backdrop of the far-right Israeli government's public admission of its legalized and institutionalized racist rule over Palestinians. Last week, Israeli Prime Minister Benjamin Netanyahu himself helped make the case for labeling the Israeli regime as apartheid, saying, "Israel is not a state of all its citizens. According to the basic nationality law we passed, Israel is the nation-state of the Jewish people – and only it.”
Israel's new Nation State Law, evoked by Netanyahu, is one example of a number of Israeli laws that systematically enshrine in Israel’s legal framework racial discrimination against Palestinians living in the Occupied Palestinian Territory, as citizens of Israel, and in exile, fitting the definition of apartheid under international law.
“Israel's decades-old oppression of Palestinians is increasingly understood for what it’s always been-- exclusionary and racist. Israeli Apartheid Week events across five continents demonstrate the rapidly growing grassroots support for the nonviolent, anti-racist and intersectional struggle for Palestinian freedom, justice and equality,” commented Ana Sanchez, International Campaigns Officer with the BNC.
“Despite efforts by political leaders to repress it, BDS is inspiring Palestinian and international activists, academics, artists, feminists, students, church organizers, racial and social justice movements, LGBTQ advocates, and others to act in the pursuit of our respective inalienable rights. United we shall overcome.”
IAW in 2019 focuses on the demand for a global military embargo on Israel. One more justification for that demand, BDS activists assert, was provided by the new UN report on the Gaza March of Return which found that Israel may have committed crimes against humanity by killing close to 200 unarmed Palestinian protesters and injuring thousands. Palestinian civil society, Amnesty International, the UK Labor Party, and other civil society groups have all called for a military embargo on Israel.
Israeli Apartheid Week is an international series of events raising awareness about Israel’s apartheid regime over the Palestinian people and building support for the nonviolent BDS movement. Many additional IAW events in Asia, Africa, and Latin America - where IAW runs from March 24 to April 13 - will be added to the more than 80 IAW events currently on the IAW calendar. Last year IAW events were held in over 200 cities worldwide.