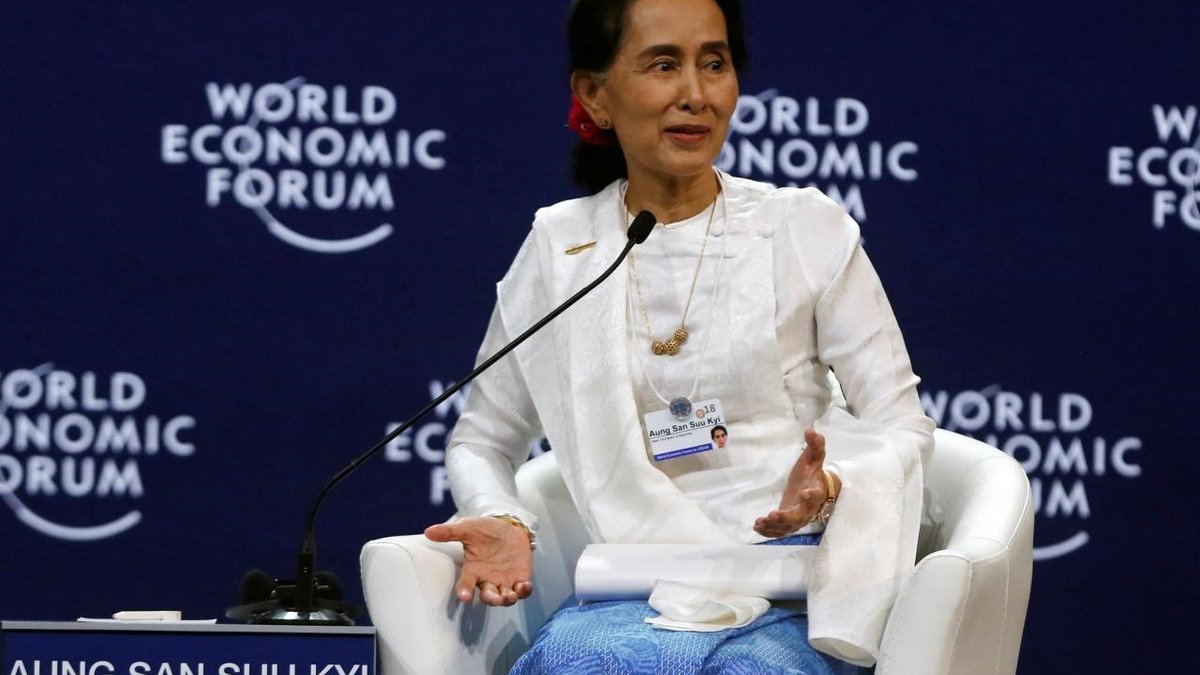 HANOI (Reuters) - Myanmar government leader Aung San Suu Kyi on Thursday said two jailed Reuters journalists can appeal their seven-year sentence, and that their jailing had nothing to do with freedom of expression.

Asked how she felt about jailing journalists as a democratic leader, Suu Kyi said: “They were not jailed because they were journalists, they were jailed because...the court has decided that they have broken the Official Secrets Act.”
She made her comments at the World Economic Forum on ASEAN in Hanoi in response to a question from the forum moderator who asked whether she felt comfortable about the reporters being jailed.
The journalists, Wa Lone, 32, and Kyaw Soe Oo, 28, were found guilty on official secrets charges and sentenced earlier this month in a landmark case seen as a test of progress toward democracy in Myanmar.
Their imprisonment has prompted an international outpouring of support, including a call for their release by U.S. Vice President Mike Pence. The journalists were investigating the killing of Rohingya villagers by security forces at the time of their arrest last December, and had pleaded not guilty.
“I wonder whether very many people have actually read the summary of the judgment which had nothing to do with freedom of expression at all, it had to do with an Official Secrets Act,” Suu Kyi said.
“If we believe in the rule of law, they have every right to appeal the judgment and to point out why the judgment was wrong.”
When asked to comment on Pence’s call to release the journalists, Suu Kyi responded by asking if the critics felt there had been a miscarriage of justice.
“The case has been held in open court and all the hearings have been open to everybody who wished to go and attend them and if anybody feels there has been a miscarriage of justice I would like them to point it out,” she said.
The guilty verdicts of the two Reuters reporters on Sept. 3 has sharply divided public opinion in Myanmar. On Wednesday Wa Lone and Kyaw Soe Oo were honored by a foundation set up by the late Win Tin, one of the country’s most prominent political prisoners and a close ally of a Suu Kyi. In granting the prestigious award, the foundation said it would oppose their convictions and demand their release.
Zaw Htay, spokesman for the office of Myanmar’s president, was not immediately available to comment on Suu Kyi’s remarks.
Earlier on Thursday, Suu Kyi at the same WEF session said in hindsight her government could have handled the situation in Rakhine state better.
“There are of course ways in which we, with hindsight, might think that the situation could have been handled better,” Suu Kyi said. “But we believe that for the sake of long-term stability and security we have to be fair to all sides...We cannot choose and pick who should be protected by the rule of law.”
Some 700,000 Rohingya Muslims fled Rakhine after government troops led a brutal crackdown in Myanmar’s Rakhine state in response to attacks by the Arakan Rohingya Salvation Army on 30 Myanmar police posts and a military base in August 2017.
U.N. investigators last month said Myanmar’s military carried out mass killings and gang rapes of Rohingya with “genocidal intent”, and that the commander-in-chief and five generals should be prosecuted for the gravest crimes under international law.
Myanmar has denied allegations of atrocities, saying its military carried out justifiable actions against militants.
Source: here