Roberts assures audience Supreme Court will serve ‘one nation,’ not one party or interest 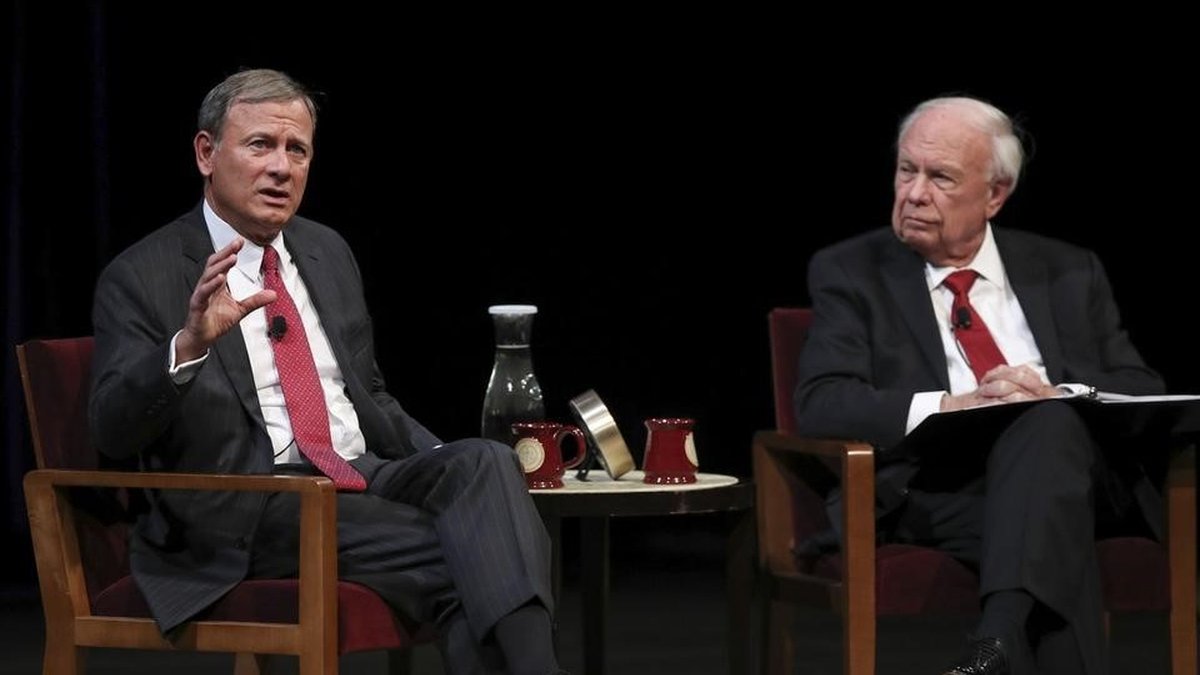 Chief Justice John G. Roberts Jr. for the first time Tuesday addressed the recent bitter partisan fight over new Justice Brett M. Kavanaugh and the Supreme Court, seeking to “assure” an audience that the court will serve “one nation” and not “one party or one interest.”
Before being interviewed by a law professor at the University of Minnesota, Roberts told an audience of 2,700 that he wanted to speak to the “contentious events in Washington in recent weeks,” and to “emphasize how the judicial branch is, must be, very different.”
“I have great respect for our public officials; after all, they speak for the people, and that commands a certain degree of humility from those of us in the judicial branch, who do not.
“We do not speak for the people, but we speak for the Constitution.”
The nasty fight over Kavanaugh’s confirmation and his replacement of Justice Anthony M. Kennedy is likely to solidify a conservative majority on the Supreme Court for a generation. It now has five consistent conservatives, all chosen by Republican presidents, and four liberals picked by Democratic presidents.
But Roberts said the court must try not to become identified with partisan interests.
“Our role is very clear: We are to interpret the Constitution and laws of the United States, and to ensure that the political branches act within them,” he said. “That job obviously requires independence from the political branches. The story of the Supreme Court would be very different without that sort of independence.”
Justices don’t react to polls, Roberts said later in his comments, and he said some of the great decisions of the court — Brown v. Board of Education or West Virginia v. Barnett, which said government could not compel students to salute the flag in violation of their religious beliefs — came in cases where the court was protecting minorities from the will of the majority.
“The court has from time to time erred and erred greatly,” he said. “But when it has, it’s been because the court yielded to political pressure.” He noted that the court “shamefully” upheld the internment of Japanese Americans during World War II.
Roberts gives only a few public speeches each year, and is known for choosing his words carefully. It seemed clear that he felt he needed to address how the partisan fights in Washington have turned the judiciary into something of a political spoils system.
Since the confirmation fight, other justices have made similar defenses of the court, or made symbolic gestures of unity. Both liberal and conservative justices showed up for Kavanaugh’s hastily scheduled swearing-in after he was approved in one of the closest votes in history. All justices attended a later White House ceremony.
Roberts did not mention Kavanaugh specifically, but gave him a nod of approval by quoting him.
The 63-year-old chief justice noted that for a century, justices have shaken each other’s hands before taking the bench to hear arguments.
“It’s a small thing, perhaps, but it is a repeated reminder that, as our newest colleague put it, we do not sit on opposite sides of an aisle, we do not caucus in separate rooms, we do not serve one party or one interest, we serve one nation.”
He added: “And I want to assure all of you that we will continue to do that.”
In a conversation with law professor Robert A. Stein and answering questions from students, Roberts also touched on a number of other subjects, including cameras in the courtroom, his female colleagues and having a new member of the court.
He repeated his opposition to cameras, saying he doesn’t think they would help the court in its essential job of deciding cases. He said he worried lawyers and some of his colleagues might act differently.
He also is unconcerned about polls that show few Americans can name him or other members of the court. The court should speak as a body rather than as individuals. It’s why “we wear black robes,” he said.
And he said he is not affected by criticism of his opinions. “The good thing about life tenure is it really doesn’t bother you very much.”
He insisted the court’s collegiality is real, despite its splintered decisions. For one thing, he said, “we do think we are in this important enterprise together.” And he said “we’re often the only people we can talk to about certain subjects,” such as politics.
Still, he said, it is good that the justices basically don’t see each other for two months after the term ends in late June.
Asked by a female student whether having women colleagues has impacted how he views cases, Roberts said “I guess I don’t really know.”
He said he understands the argument that women might bring a different perspective, but he never hears anything that makes him think “that’s a perculiarly female perspective on the law. . . I don’t see any difference on the legal analysis or anything like that.”
Having a new member of the court puts the justices on better behavior, at least for a while, Roberts said, comparing it to a “new in-law at Thanksgiving.”
And he acknowledged that after 13 years as chief justice, it remained harder than he had hoped when he joined the court that he could encourage bigger majorities for decisions and fewer 5-to-4 splits.
“Well, I have to say it’s a project in progress still,” he said.